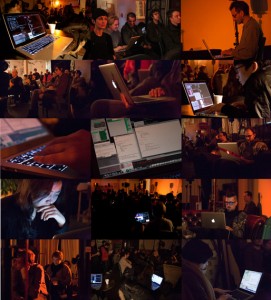 Codelets that create sound patterns are being rewritten while running, sounds can be spatialised by distributing them across the unamplified laptops in the network, and all code gets equally shared between the players for further rewriting. Republic111 explores a highly democratic form collaborative live coding: Using and extending the SuperCollider library “Republic” developed by powerbooks unplugged, a continuously evolving code base mutates in performances that can morph or instantly switch between radically different aggregate states. Beginning from a workshop on network music with Julian Rohrhuber and Alberto de Campo, the group has been playing since 2009 with an expanding line-up; currently up to 15 players assemble for performances.